“Our land was first created by Bula, who came from saltwater country to the north. With his two wives, the Ngallenjilenji, he hunted across the land and in doing so transformed the landscape through his actions. Bula finally went under the ground at a number of locations north of Katherine in an area known to us as “Sickness Country”. It is called this because the area is very dangerous, and should not be disturbed for fear that earthquakes and fire will destroy the world… Bolung the Rainbow Serpent inhabits the deep green pools found in the Second Gorge. We do not fish in the pools where Bolung sits. When fishing close to these pools, we can take only a small portion of the fish caught and throw-back the rest in order to appease Bolung. Drinking water must not be taken from these deep pools but rather from the shallow associated waters. Pregnant women and new initiates may not swim in the Katherine River for fear of disturbing Bolung, who must not be spoken to and must be left undisturbed.”
Dreamtime of the Jawoyn people 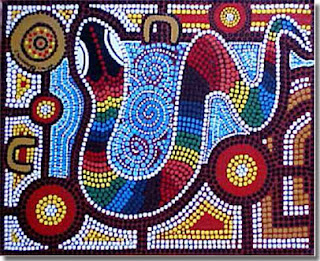 The Rainbow Serpent by Joshua Yasserie
Sickness Country described above is located in the northern inland part of the Northern Territory. As the Dreamtime explains, the Jawoyn people who are the traditional Aboriginal land owners have long been aware of potentially adverse health effects from disturbing this land. Interestingly, the location of Sickness Country coincides with some of the largest uranium deposits in Australia. Although many areas within Sickness country are sacred to avoid disturbing Bula, in modern times they are also very attractive to mining companies. In the early 1990s, the Jawoyn people opposed the proposal to mine Coronation Hill, or Guratba, which has been referred to as “one of the great unmined and barely studied uranium ore deposits on the planet”. After great political debate, the area was designated a Conservation Zone of the Kakadu National Park, one of four of Australian sites included on the World Heritage List for outstanding cultural and natural universal values.
(From Ljung et al., An Overview of Medical Geology Issues in Australia and Oceana in Medical Geology: A Regional Synthesis, Springer 2010, pp. 111-112.)
So, what does this story have to do with water chemistry and health outcomes in places other than Crocodile Dundee's backyard? Plenty...but you're either going to have to tune out the cacophany of Christmas consumer messages and listen to the ancient wisdom of the indigenous peoples of the world or get over your angst about what they were trying to teach you in high school chemistry class.
Ideally, you'll do both and this blog will help you find your way out of Sickness Country.
Posted by Heather Dawn Gingerich at 07:42 2 comments: